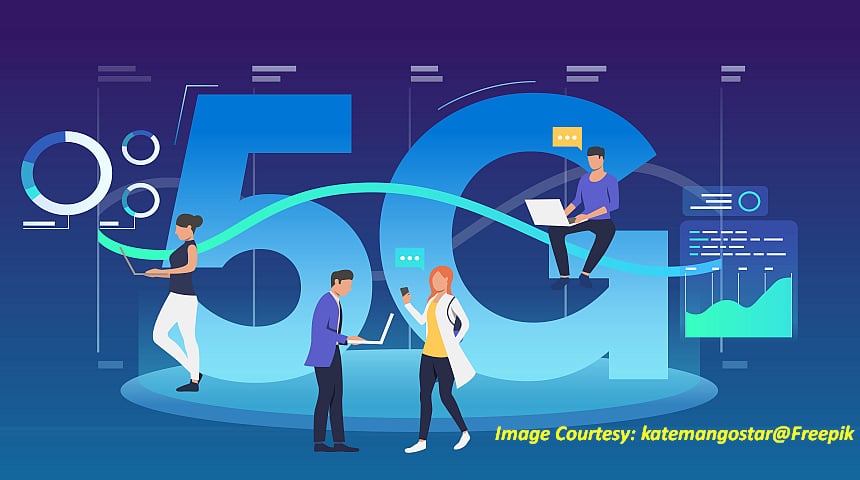 Economy & Nation
The growth in the operating cash-flows of Bharti Airtel Ltd and Reliance Jio are likely to be sufficient to pay for their 5G spectrum assets and related capex, says Fitch Ratings.
In a report, the rating agency says, "We expect Bharti's and Jio's free cash flow generation to improve as operating cash flow growth will more than offset incremental spectrum-related payments and the increase in 5G-related capex. We believe that 5G capex in 2023-2024 will replace the current 4G capex, as 4G coverage is largely complete. Telcos will also continue to strengthen their fibre infrastructure by connecting towers with fibre and backhaul infrastructure to prepare for the launch of 5G services."
The telcos acquired spectrum at an auction that concluded on 1st August, which was by far the largest ever in India by the amount of spectrum sold and proceeds raised. About 72,098 megahertz (MHz) of the spectrum was offered for auction and, out of that, 51,236MHz has been sold. Reliance Jio bought the more expensive 700MHz in all 22 circles. The band has a range from 5-10km, which gives good base coverage. Airtel acquired 19,867.8MHz spectrum in 900MHz, 1800MHz, 2100MHz, 3300MHz and 26GHz frequency bands.
The spectrum assets have a life of 20 years, and telcos need to pay spectrum dues in 20 equal annual instalments at an interest rate of 7%. Jio, Bharti and Vodafone Idea will pay US$1bn (billion), US$500mn (million) and US$200mn per annum, including the interest component, respectively, for the spectrum purchases.
Fitch says it expects that the credit profiles of Bharti and Jio, a subsidiary of Reliance Industries Ltd (RIL), will remain intact as their balance sheets have been strengthened by large equity raisings in the past three years. "We expect that Bharti's net debt/earnings before interest, taxes, depreciation and amortisation (EBITDA) for financial year ending March 2023 (FY23) will be 1.5 times to 1.6 times, well below the 2.5 times level above which Fitch may consider negative rating action."
Further, the rating agency also sees the telcos' operating cash flows to improve on higher monthly average revenue per user (ARPU). "We expect industry monthly ARPU (US$2) to grow by 15%-25% in the next 12-18 months, as telcos will likely increase headline tariffs in the next 12 months. We expect ARPUs to continue to increase in the medium term, as telcos will likely price 5G services higher than 4G. ARPUs will also grow as 2G and 3G users gradually migrate to higher-priced 4G and potential 5G plans."
"We forecast telcos' EBITDA margin to expand by 200-300bp as telcos will realise cost savings on lower spectrum usage charges, given they will not have to pay usage charges on the spectrum bought in the latest auction," Fitch says.
However, according to the rating agency, the 5G business case will only gradually evolve with limited cash-flow contribution in the initial years and telcos will likely focus on 5G use case for enterprises initially to accelerate revenue growth in this segment.
Fitch says it believes the industry will continue to consolidate with Jio and Bharti together garnering 80%-85% from 78% as of March 2022 of the revenue of private telcos during 2023-2024.
"Jio's and Bharti's network positions will pull ahead of Vodafone Idea as they have larger sub-1GHz spectrum and about three times Vodafone Idea's high frequency 5G spectrum. Sub-1GHz spectrum has better propagation qualities than higher-frequency spectrum," the rating agency says.
Jio was the largest spender in the latest auction, buying US$11bn worth of spectrum, followed by Bharti at US$5.4bn and the third-largest Vodafone Idea, buying US$2.5bn.
Bharti and Jio acquired pan-India 5G spectrum assets in 3.3gigahertz (GHz) and spectrum in the 26GHz range. They also topped up their existing 4G spectrum holdings by acquiring spectrum in 900 megahertz (MHz), 1800MHz and 2,100MHz.
Jio was the only one that acquired 700MHz spectrum, which will likely improve indoor and rural coverage. Vodafone Idea acquired 850MHz of spectrum in 3.3GHz compared to 2,200MHz by Bharti and 2,440MHz by Jio. A unit of Adani group acquired 400MHz spectrum in 26GHz band worth Rs212 crore. Economy & Nation
5G Auction: Which Telco Got What, What Bands Were Sold the Most
IANS 02 August 2022
With India successfully ending its mega 5G spectrum auction with bids worth Rs1,50,173 crore for 71% of total 5G airwaves, here is the overall breakup of the amount as well as various bands, including the super-expensive 700MHz...